On April 2, Bitcoin mysteriously spiked to $5,000, reaching nearly five-month highs in just a 60-minute period. Some experts think this jump may be the beginning of a renewed surge in cryptocurrency value.

Some attributed the surge to an April Fool’s hoax. An online news site published a fake article claiming that the U.S. Securities and Exchange Commission approved Bitcoin exchange-traded funds. Trading desks have indicated the surge may have been short covering by traders who had stop-loss orders at or around $4,200.

Regardless of the reason, this volatility, despite some upsides – including the value of digital assets tracked by CoinMarket.com jumping by roughly $17B – is deterring investors. It is one of a number of reasons cryptocurrencies will continue to be slow in becoming an acceptable and widely adopted medium of exchange. 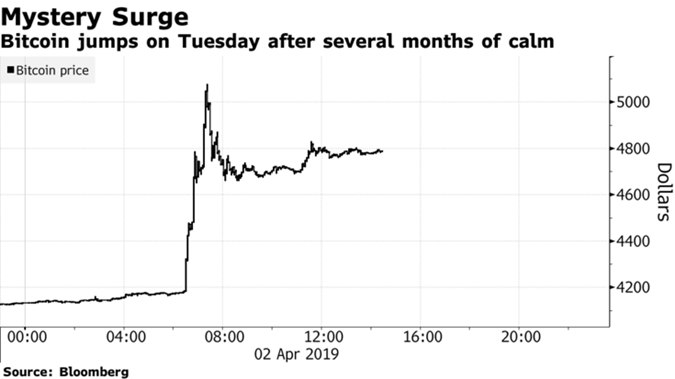 The recent uptick is likely just the beginning of an unpredictable and volatile trading market for cryptocurrency. It is the first significant activity we’ve seen since Nasdaq launched Bitcoin (BTC) and Ethereum (ETH) indices in late February, but certainly won’t be the last. Still, now that leading cryptocurrencies are available to traditional stock market investors on Wall Street and elsewhere, mainstream momentum will continue to build, with the potential for significant long-term results. Further, it is likely that recent activities will energize other forms of crypto and spur additional development of new tokens, securities and cryptocurrencies in the coming months.

Also of note is that earlier this year, Bitcoin took the lead in annual transaction volume, with a posting of $1.3 trillion in transactions in 2018. The figures were significantly higher than those of other leading players in online payments. This is another signal of cryptocurrency gaining steam and legitimacy in the financial world. In recent months, several major financial institutions announced the release of their stablecoins – essentially a work-around of actual cryptocurrency – and other leading corporations are working on them as well. This could lead to stablecoins becoming the most used product in the cryptocurrency space, and will likely bite into the overall crypto market share.

As corporations keep an eye on this landscape, and work to determine how cryptocurrencies may fit into their products, services and business processes, it is important to remember that this is a very new class of asset. Businesses should tread carefully, and keep in mind that cryptocurrencies still suffer from lack of clear regulatory guidance, and should not be expected to follow patterns of traditional markets.